The Book of the Crowman

In between all the publishing turbulence, I wanted to share with you some experiences of a more personal nature. My life isn’t just about books – even though that’s often my focus. Alongside my publishing journey, there’s the dance of my inner experiences, which can be equally stormy.

I’ve lived with depression, anxiety, panic attacks and other emotional troubles since childhood, often enduring long periods of profound misery or blankness. Many elements have contributed to my healing journey over the years, but I’m dedicating this post to the Wim Hof Method and the things that have changed for me over the course of twelve months spent practising it.

This time last year, knowing I’m a bit of a ‘seeker’, a close family friend sent me a YouTube link to a video about Wim Hof. 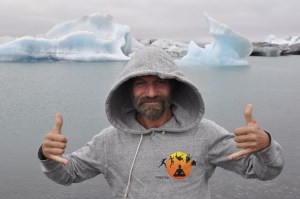 I’m a bookish fellow, more given to Yoga and Tai Chi than endurance sports or extreme fitness. Nevertheless, I was fascinated by the things Wim speaks about in various interviews and presentations. Among other benefits, his technique alkalinises the blood, reduces inflammation and supercharges the immune system – all of this scientifically verified.

But there was more.

It transpires that Wim’s first wife, and mother to his first four children, committed suicide as a result of depression. He’s said in the past that if he’d been able to teach her the method he subsequently developed, it could have saved her; apparently, reducing inflammation around the brain has a direct and very positive effect on depression. This, perhaps, and Wim’s openness and sincerity about these matters, got my attention.

Could I really affect my psychological and physical wellbeing just by breathing and taking cold showers? After watching a number of Wim’s videos, it seemed entirely possible. What was there to lose in giving it a try?

I was alone in a cottage in Devon about this time last year, starting the gargantuan edit on Gallashan. That was when I first tried the breathing exercise and cold training. Something about it felt so good that I had to keep doing it. And doing it. Every day.

Here I am a year later, feeling healthier than I’ve ever felt, in spite of the crap that life keeps throwing at me.

Despite medical science telling us there’s no cure for the common cold, big pharma turns an obscene annual profit peddling remedies. If you go to the doctor with mental health problems, the industry wins again with its arsenal of anti-depressants. Having put Wim Hof’s method to the test, I suggest that greater wisdom and practical application may derive from it than from the effects of a handful of expensive smarties.

That’s why the Wim Hof Method has become one of the mainstays of my daily regime.

If you want to learn how to do it, check the free videos on Wim’s site – you can get the hang of it in a matter of minutes.

Joseph D’Lacey was born in London and has spent most of his life in the midlands. For many years, he has written novels and short stories, usually in the darker genres. This work has always been somewhat at odds with his other vocation: acupuncture and healing. In response to the machinations of our parasitic elites and the needs of living men and women everywhere, writing fiction has taken a back seat to sharing Truth, promoting Sovereignty and working to improve people's Wellbeing - physically, mentally, emotionally and spiritually. All this involves blogging non-fiction which, it turns out, is a lot harder than just telling stories... View all posts by josephdlacey